The History of Fee Fee Cemetery

In 1815 Mr. James R. Richardson deeded the church a three acre plot of land for a church building site and the maintenance of a cemetery.  The property was located along an old trail that had become the main road between St. Louis and St. Charles.  It was at a junction with another old trail that in 1830 was officially designated as Fee Fee Church Road.  The church built a log house 24×30 feet on the property.

In 1822, the cemetery was plotted around the log meetinghouse and a fence was installed.  It was reported that the first interment was made that year but the name and location of this grave is not known.  If you walk through the cemetery you will find monuments dated before 1822.  This indicates that graves have been moved into the cemetery.  An example of this is the marker for Abraham and Sarah Musick who died in 1800. 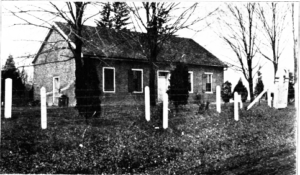 The young church flourished and the log building became too small to accommodate the members.  It was decided in 1828 that a new building was needed.  A new brick building was started and completed the following year.  The building had a door in the middle of the front with two windows on each side.  There were also doors on each end of the building and windows along the back wall.  The building had a brick floor and a small brick chimney.

The Fee Fee Meeting House was one of the finest buildings in the area and was used for church services and other meetings including as a school house.  It also represents a spirit of cooperation.  The Presbyterians in the area decided to organize a church in 1842, and two years later the Methodists also organized a church.  The little Baptist church was only using the meeting house twice a month, so the congregation offered to share the building with the other two churches.  The Baptist and Presbyterian churches were fully organized with pastors, church officers, and regularly scheduled services.  The Methodist soon built a church in Bridgeton.  It was agreed that the Presbyterian church held services on the first and third Sunday of the month, the Baptist church had services on the second and fourth Sunday of the month, and the Methodist church held service every fifth Sunday of the month.  The joint use of the meeting house extended to the cemetery and many of the early members of all three churches were buried in the Fee Fee Cemetery.  This arrangement peacefully continued for years and is a beautiful example of Christian fellowship.

The Old Fee Fee meetinghouse was now empty.  It had been hoped to make the old church building a memorial, but money was not available and these plans failed.  Soon the building became the home of the cemetery sexton.  In 1903, the building was modified to add internal walls and a porch outside.  The building still stands on the cemetery grounds and is now used as the cemetery office. The Fee Fee Meeting House is recognized as one of the oldest church buildings in the St. Louis area.

In the spring of 1876 the Baptist trustees proposed to deed the cemetery and house to the three churches, the Presbyterians at Mizpah, the Methodist Episcopal South church at Bridgeton, and the Baptist at Fee Fee.  Representatives of the three churches made application to St. Louis County for a certificate of incorporation.  St. louis County approved the application and the Fee Fee Cemetery Association was granted a Certificate of Incorporation on May 19, 1876.  The first meeting of the Fee Fee Cemetery Association was held on June 3, 1876.  Four trustees were elected from each of the three churches, officers were elected and all cemetery funds were transferred to the new organization.  Over the years it appears that the Association held only yearly meetings.  The operation of the cemetery was administered by an executive committee made up of one trustee from each of the three churches.

Some time after the turn of the century the Methodist Episcopal South church ceased to exist and the two-remaining church managed the cemetery operations.  In 1983, Mizpah Presbyterian Church voted to withdraw from the Cemetery Association over concerns of cemetery finances.  The trustees of the Fee Fee Cemetery Association is now a self-elected board that operates independently of Fee Fee Baptist Church. 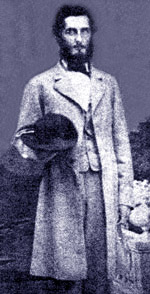 James Morgan Utz Was born on March 9, 1841 to Franklin T. and Amelia A. Utz of Bridgeton, Missouri. At the age of twenty and just prior to the Battle of Lexington, Missouri, James left St. Louis to join General Sterling Price’s Confederate Army.

Utz served in the 8th Infantry Battalion until November 1862 when it was consolidated into Clark’s 9th Infantry Regiment. Utz was captured September 10, 1862 and later exchanged. From November 22, 1863 to December 2, 1863, he was on detached duty with Capt. Ben Von Phul’s company of light artillery at Camp Bragg, Arkansas. During the summer of 1864, James Utz was promoted to major and assigned as special agent to the Confederate Army due to his knowledge of Southern sympathizers and members of the secret Copperhead organization in St. Louis known as “The Order of American Knights.”

In July of 1864, Major Utz’ father, James Utz, was arrested near his home as a “Rebel” sympathizer and sent to Gratiot Street Prison.  Although no charges were made against “Old Man” Utz, he was left in prison until December.

In mid-September, Major Utz, in conjunction with General Price’s attempt to liberate Missouri, made his way through enemy lines into St. Louis. He made contact with James Barnridge, a bricklayer, at 14th and O’Fallon streets and secured a wagon. Utz then met with Paul Fusz on 7th Street between Cass and O’Fallon streets. From Fusz, he acquired Federal uniforms. Utz, Barnridge, and Fusz then obtained quinine, blue mass, and other medical supplies from a druggist named Cole.

On the 24th of September, as Major Utz, Fusz, Cole and four others were leaving St. Louis with their wagonload of contraband medicine for General Jo Shelby’s command.  They were spotted about midnight at the corner of Clayton and Ballas Road by a patrol of the 1st Cavalry, Enrolled Missouri Militia, led by Capt. Michael Zwilling. Paul Fusz was wearing a Federal uniform but had no papers. A search of the wagon revealed six revolvers, a sword, ammunition, medicine, and hidden men. A cipher book and several letters for Confederate officers were found on Major Utz. These men were sent to Gratiot Street Prison. 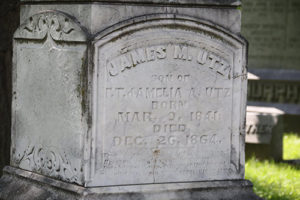 Paul Fusz was able to get transferred to the State Prison at Jefferson City and was later paroled by Lincoln. Major James M. Utz was charged with spying, recruiting and transporting contraband (medicine). In spite of pleas from his uncle, St. Louis County Judge Fredrick Hyatt, Major Utz, C. S. A., was hanged on December 26th, 1864. Lincoln had issued a pardon for him but officers at Gratiot Street Prison hung him before the pardon’s arrival.

Major James Morgan Utz is buried at Fee Fee Cemetery.  Major Utz’s headstone reads: “Friends weep for him who sleeps beneath this sod; His cruel fate in sympathy deplore; But while you mourn, remember that his God has called him hence, where sorrows are no more.”